Teaching times tables to your kid can feel utterly overwhelming. I just got this message from a parent today. Sound familiar? 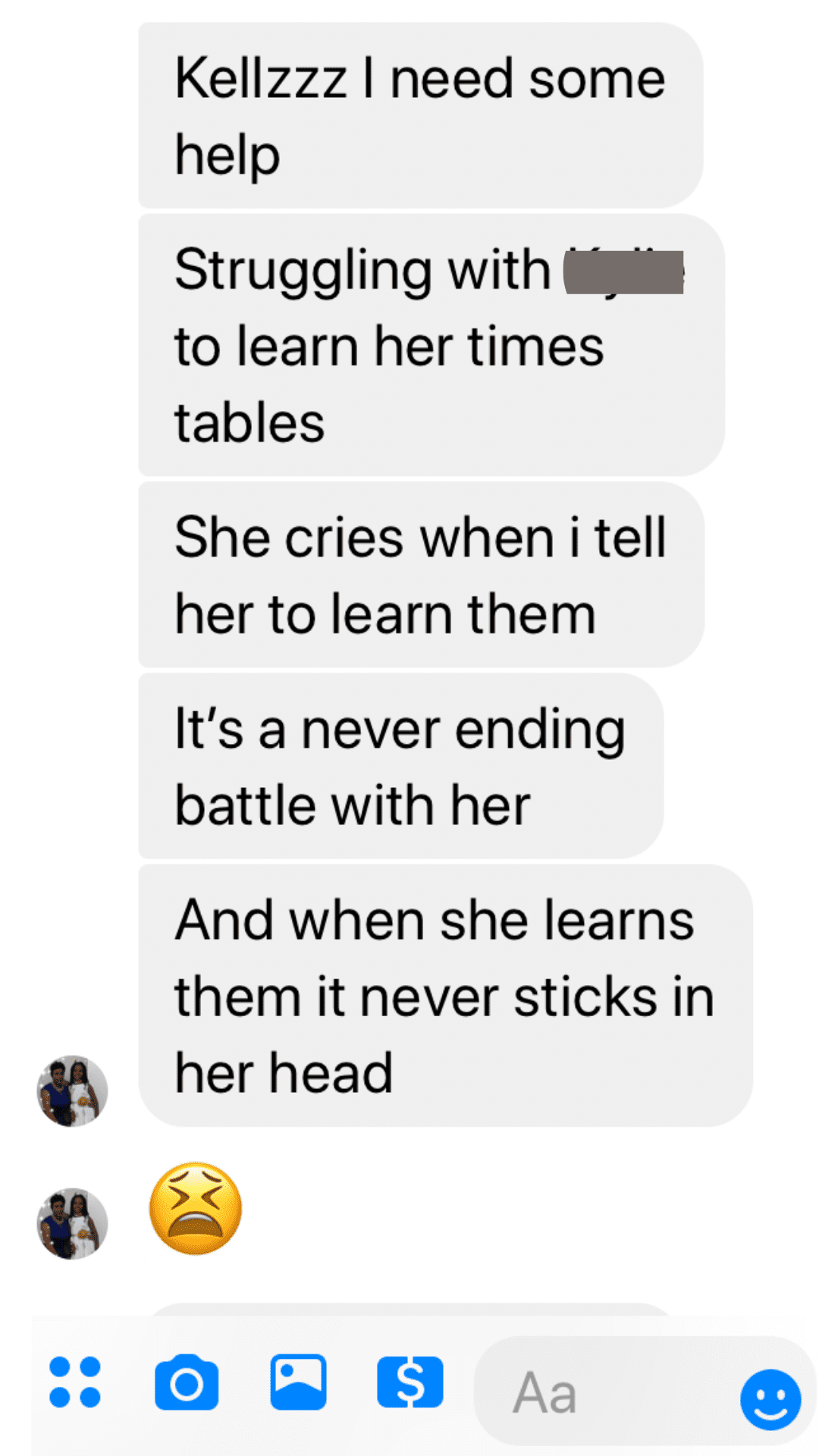 Yeah. It sucks…and your child is just as frustrated as you are.

I hate to break it to you, but she’s got 144 of the little buggers to memorize. A HUNDRED AND FORTY FOUR. How does a parent even begin? Flash cards? Pop quizzes at the dinner table?

If you’ve been plugging at this for awhile and ending up frustrated, it might be time for a reset.

Start by saying, “I’m noticing that the stuff we’ve been doing with math facts isn’t really helping you–and it isn’t much fun. Do you agree? How would you feel about trying something different that might work better?”

If you’re both going to put in time and effort to learning the times tables, you want that learning to stick. You need a solid strategy to help her understand and learn multiplication facts for the long haul.

You need a solid strategy to help her understand and learn multiplication facts for the long haul.

Try these 10 awesome tips for teaching times tables that will help your daughter learn her multiplication facts faster and better than you ever thought possible.

1. Learn times tables out of order

Some multiplication facts are easier to learn than others. Start with the easy ones to build momentum and feel a sense of progress right off the bat. 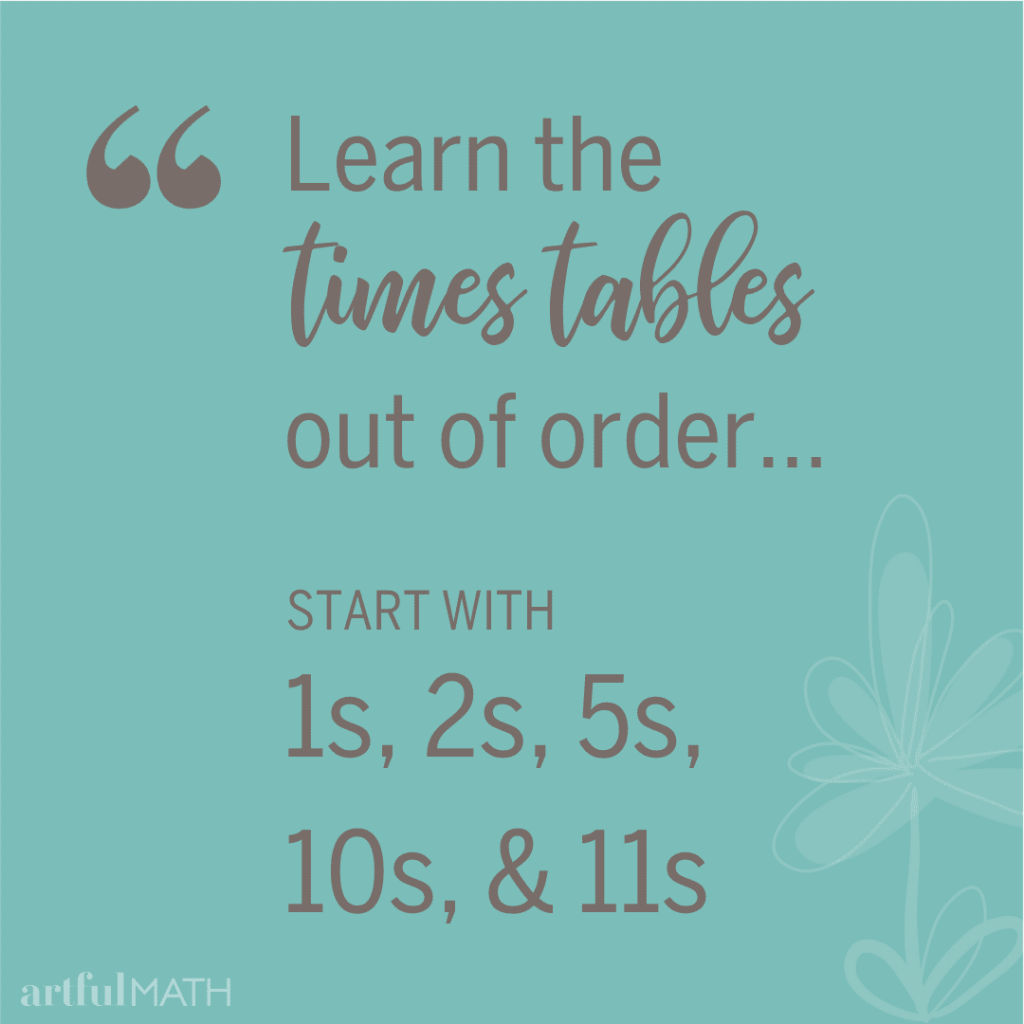 Common sense tells us that the smaller the number, the easier it is to learn, while the larger numbers would be more challenging–but in this case, common sense is wrong.

Instead, teach times tables in this order:

“Three times five” means nothing to a kid; it’s just a random rule to memorize.

But “three groups of five” actually means something. She can get a picture in her head and figure out how much that is, even if she hasn’t learned that math fact yet.

To make multiplication make sense, read the x sign as “of” instead of “times”. I usually read whole numbers as “groups of” or “rows of” and draw a picture to go with it.

When kids understand the meaning of multiplication, they relax and can quickly think through a problem, even if they’ve forgotten that particular fact.

“Three times five” means nothing to a kid; it’s just a random rule to memorize.

Multiplication is a shortcut for adding same-size amounts. It makes it easy to add party favors that hold 6 in a package, rows of chairs with 10 in each row, or squares in a chocolate bar.

Reading a multiplication problem using meaningful “groups of” language lets your girl create a picture in her mind that she can think and reason about–even if her math facts are slippery.

(You can weave the more common “times” language back in once she has a sense of what it all means.) 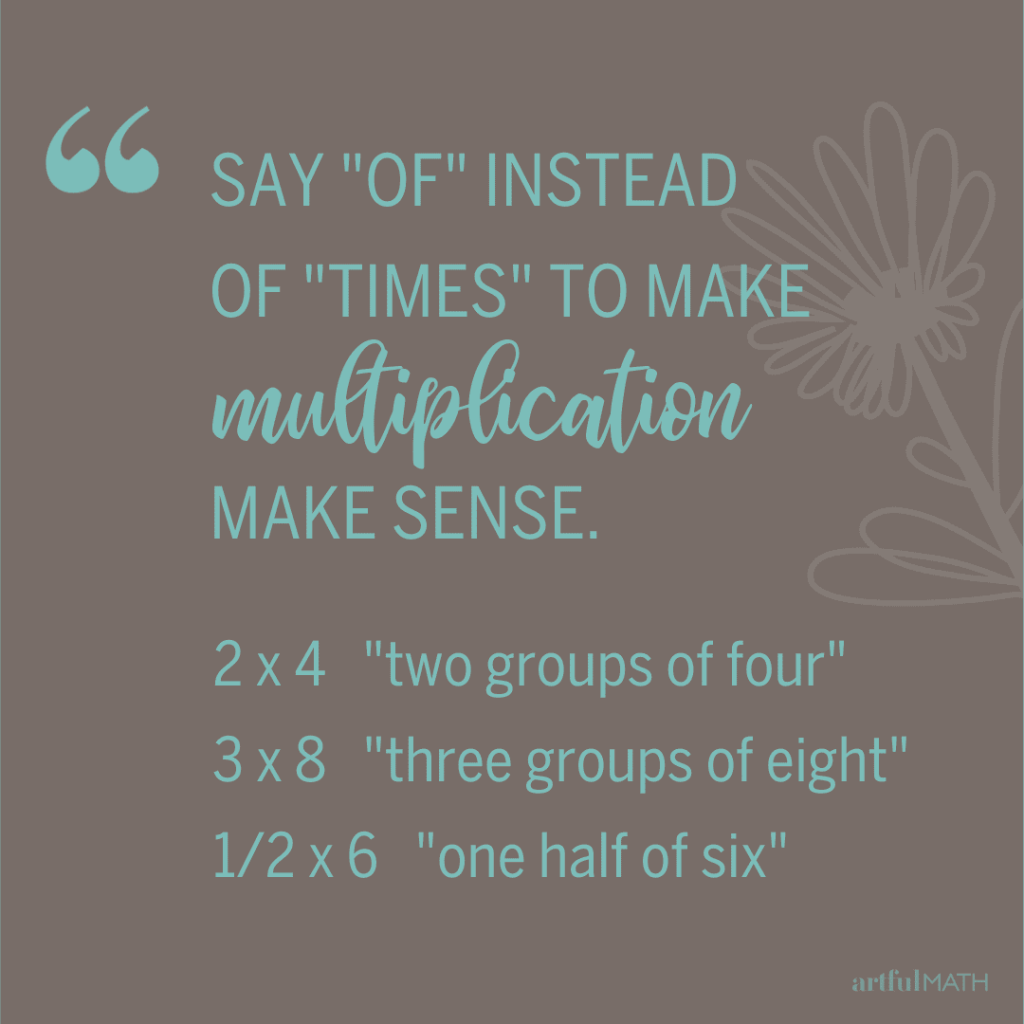 Your child doesn’t automatically know that 2×3 has the same answer as 3×2. If she has learned this rule, she may not understand why.

To help her really understand how multiplication facts are connected, show her this picture: 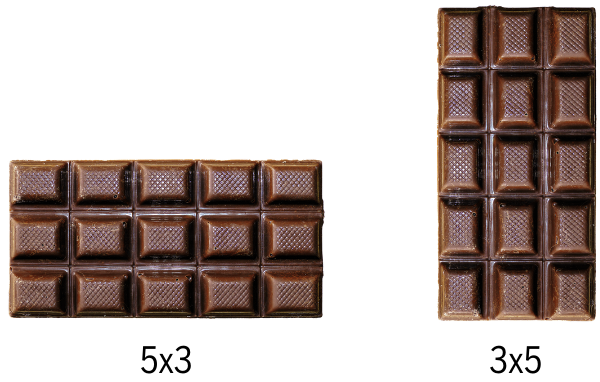 Ask: “What do you notice about these two chocolate bars? How are 5×3 and 3×5 the same? How are they different? Do you think that works for all multiplication facts? Why?”

Once she’s nailed the “flip-around rule”, she’ll have half as many facts to learn!

4. Search for multiplication in real life

Real-world multiplication shows up in some surprising places. Any scenario that has equal groups, rows, or collections is a perfect opportunity to spot multiplication “hiding” in real life.

The most common multiplication examples you’ll find in the real world are arrays. An array is a group of images or objects in equal rows–like cookies lined up on a tray, or the orderly rows of an egg carton.

Real-life arrays give the PERFECT opportunity for teaching times tables in a context that totally makes sense:

They are called square numbers because when you arrange them in an array (equal rows and columns), they look like this:

There is a naturally musical rhythm to these facts, which seems to make them easier to learn. Rock through these by reciting them together in the car (1 times 1 is 2; 2 times 2 is 4; 3 times 3 is 9…) and she’ll pick them up in no time.

One of the awesome things about multiplication facts is that there are ALWAYS cool patterns to be discovered!

Write the multiplication facts top to bottom, then ask your child, “What do you notice? What patterns do you see?”

Nines are especially rich with patterns. Many kids find the nines fascinating, and they quickly become their favorite as they learn times tables (and it feels cool to quickly master one of the “hard” facts). 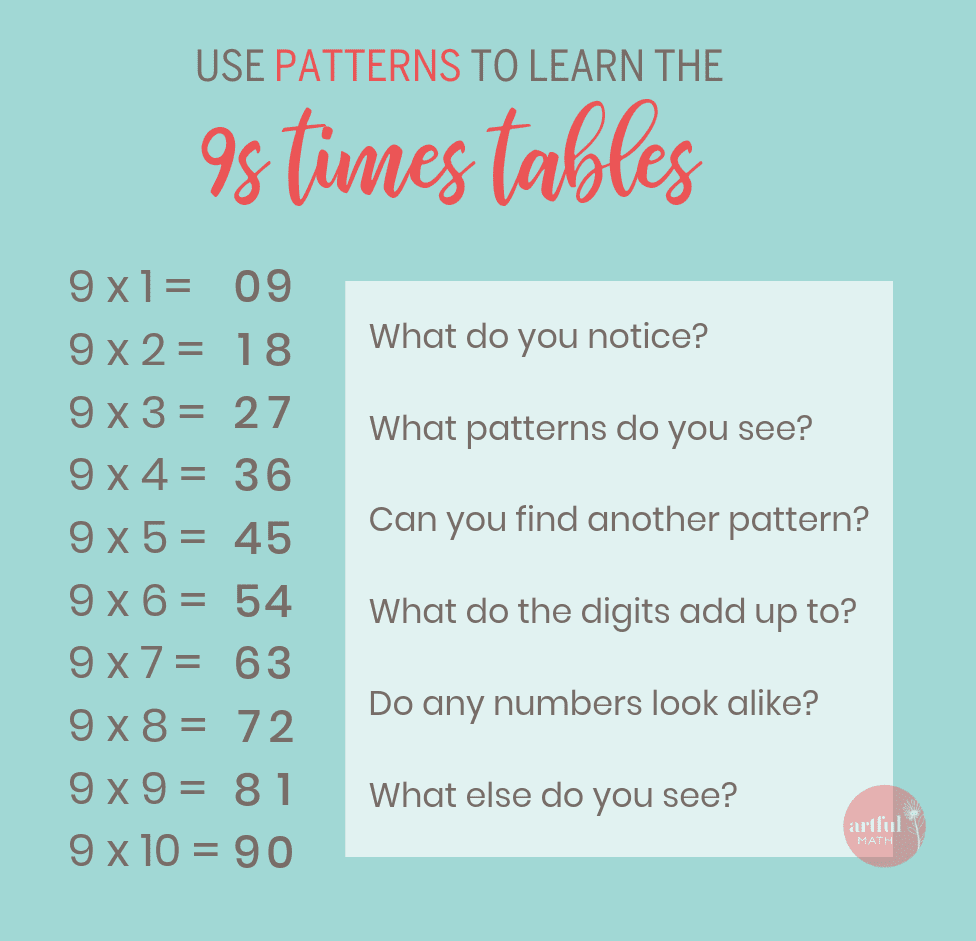 Sixes are hard for a lot of kids, but those same children may have no trouble with the fives or ones multiplication facts.

When we help kids visualize multiplication, it becomes natural for them to break a hard fact like 6×4 into two easier facts (5×4 and 1×4), then add them together.

If your child gets stuck on a hard multiplication fact, help her break it into facts she does know:

Similar to the “break apart” technique, this simple multiplication trick also uses an easier math fact to figure out a hard one.

Your child may know her twos, but not her fours. Or maybe she feels confident with her threes, but not her sixes. She’ll be able to figure out those harder facts by doubling the easier ones. 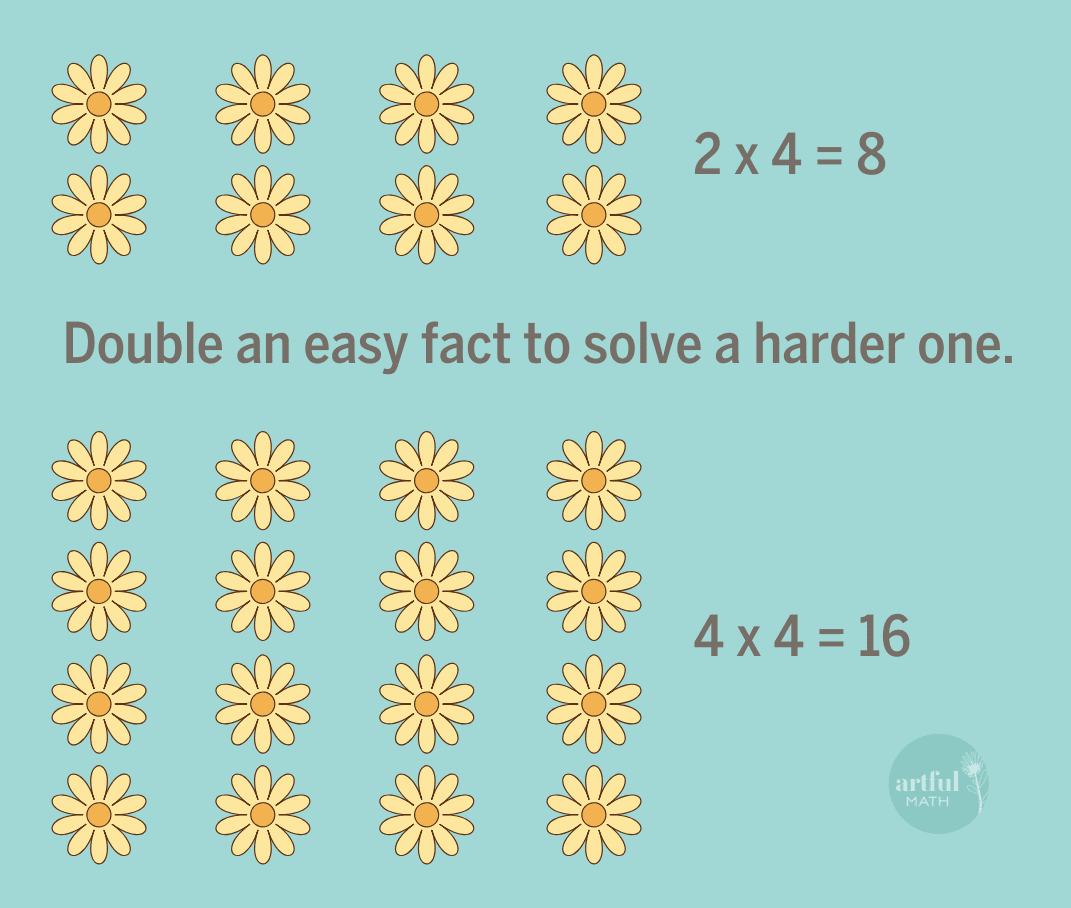 If you sense any of these negative reactions to learning multiplication facts, stop what you’re doing and play a math game.

Anything that can be done with drill, flash cards, or a speed test can be done ten times better with a math game.

NOTE: Studies have shown that timed tests do far more harm than good in creating anxiety and kids’ belief that they are “bad at math”. Timed math quizzes or high pressure speed drill can backfire and create a child who hates math.

Anything that can be done with drill or flash cards can be made ten times as fun with a math game.

One girl told me that she likes math games because “mistakes don’t count”–she can relax, play, and learn without having to stress out about having to be perfect.

Using games when you’re teaching times tables turns important math facts repetition into play and puts it into a meaningful context. And even better, it helps your girl become confident and excited about math.

Some kids seem to be naturally wired for rhythm and music.

If your child is always humming, tapping, or belting out a song, she may really connect with learning times tables through music.

Go on YouTube and search something like “8 times tables song” or “multiplication song”. She can choose the fact family she wants to learn next, and find a song she likes.

Note that most of the multiplication songs on YouTube tend to be a kind of kid rap, presumably because those are easiest to turn into a multiplication song…but there are a few (I’ll just say it) better ones on there. My personal favorites are:

TIP: The words in Mr. DeMaio videos can be a bit hard to catch. Scroll down under the video and click on SHOW MORE to see the full lyrics for that song.

Once your girl gets a tune stuck in her head, she may just learn those multiplication facts without even trying!

Some of the techniques I’ve shared here will work for your child; others, not so much. Test them out and look for a good mix of maybe 3-5 strategies she likes.

With her combo platter of multiplication tricks, she’ll be able to come at a problem in different ways and understand what’s she’s doing.

She might use some of the strategies early on, and graduate to others as her confidence grows. She might have some favorites and use others as backups if her memory fails.

Above all, pay attention to how she is feeling about multiplication–whether she’s feeling anxious or thinks she’s bad at math.

Keep things fun and light as you’re teaching times tables, and don’t worry too much about speed. She’ll become more fluent with practice and as all the pieces click into place.