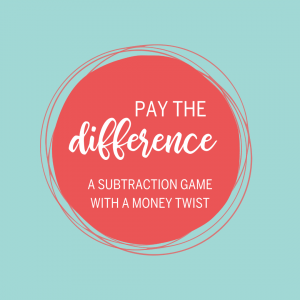 Which means, of course, that even though there’s a ton of math learning going on, this game doesn’t feel math-y at all.

Kids love playing because they get to dig their fingers into actual money (mwa-ha-ha!) and get paid by their opponent.

Meanwhile, you’ll be smugly watching your child get better at counting and subtracting money in her head–without even realizing she’s learning.

HOW TO PLAY “PAY THE DIFFERENCE” SUBTRACTION GAME

Little kids love this game as much as their older siblings, but may have a hard time doing two-digit subtraction in their heads. Here are some variations to try:

EASIEST: Take out the face cards but leave in the tens. Play as above, but give each player a dollar in dimes and pennies, and draw just one card from the pile.

So instead of comparing numbers like 32 and 91, in this subtraction game they’ll find the difference between 3 and 9.

SLIGHTLY HARDER: Leave in the face cards and the tens. Face cards are worth ten. Give each player a dollar in mixed coins.

Draw TWO cards from the pile and add them together. Players will find the difference between numbers like 18 and 12.

A QUICK NOTE ON SUBTRACTION “DIFFERENCE”

Kids learn subtraction as take away, but subtraction can also be used to find the difference between two numbers, or how much more one number is than another.

Think of it like two rows of dots. They all line up exactly, except for the part where one number is a little bigger.

This is the difference between the two numbers.

When she is subtracting money on her turn, ask, “What’s the difference between (8 and 12)?” You can help her understand what “difference” means by using those words naturally as you play.