She’s just five minutes into playing the Numbaroll place value game, and she feels like she’s just won the lottery. 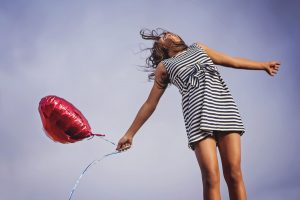 Reading and writing big numbers is one of those things adults think is easy, but is tricky even for older kids. They need to:

Numbaroll is a simple place value game that does an amazing job helping kids learn to read and write big numbers. All you need is dice and a deck of cards.

How to Play the Numbaroll Place Value Game

MATERIALS: a deck of playing cards, one or two dice

1. Remove the tens and the face cards (jack, queen, king) from your deck of cards. Shuffle.

4. Make a number with your cards–each card is one digit.

5. Use the die as a comma. (Start at the BACK of the number and put a comma after every three cards.)

…then roll again, take that many more cards, and add them to your number.

7. Read your score out loud to the other player.

8. The other player writes down your score as you read it out loud. They read your score back to you to make sure it’s written correctly.

TIPS FROM THE TRENCHES

Playing with 2 dice creates numbers into the hundred billions! Playing with two dice is a lot harder, but kids LOVE to get the really big numbers! Start with one die, and when kids are good with hundred thousands, move up to two dice for a challenge.

Print out the score sheet for the Numbaroll place value game to make it easier to line numbers up correctly and add scores.

–> Large numbers are grouped by hundreds. If the number 245 is placed between commas, it will always be read as “two hundred forty-five”, no matter where in a number it is.

–> Read the number groups between the commas AND “read” the commas. The commas are read as: thousand, million, and billion, from right to left (starting at the end of the number).

It helps to start by counting the number of commas, starting on the right-hand side, so they know whether to begin at thousands, millions, or billions.